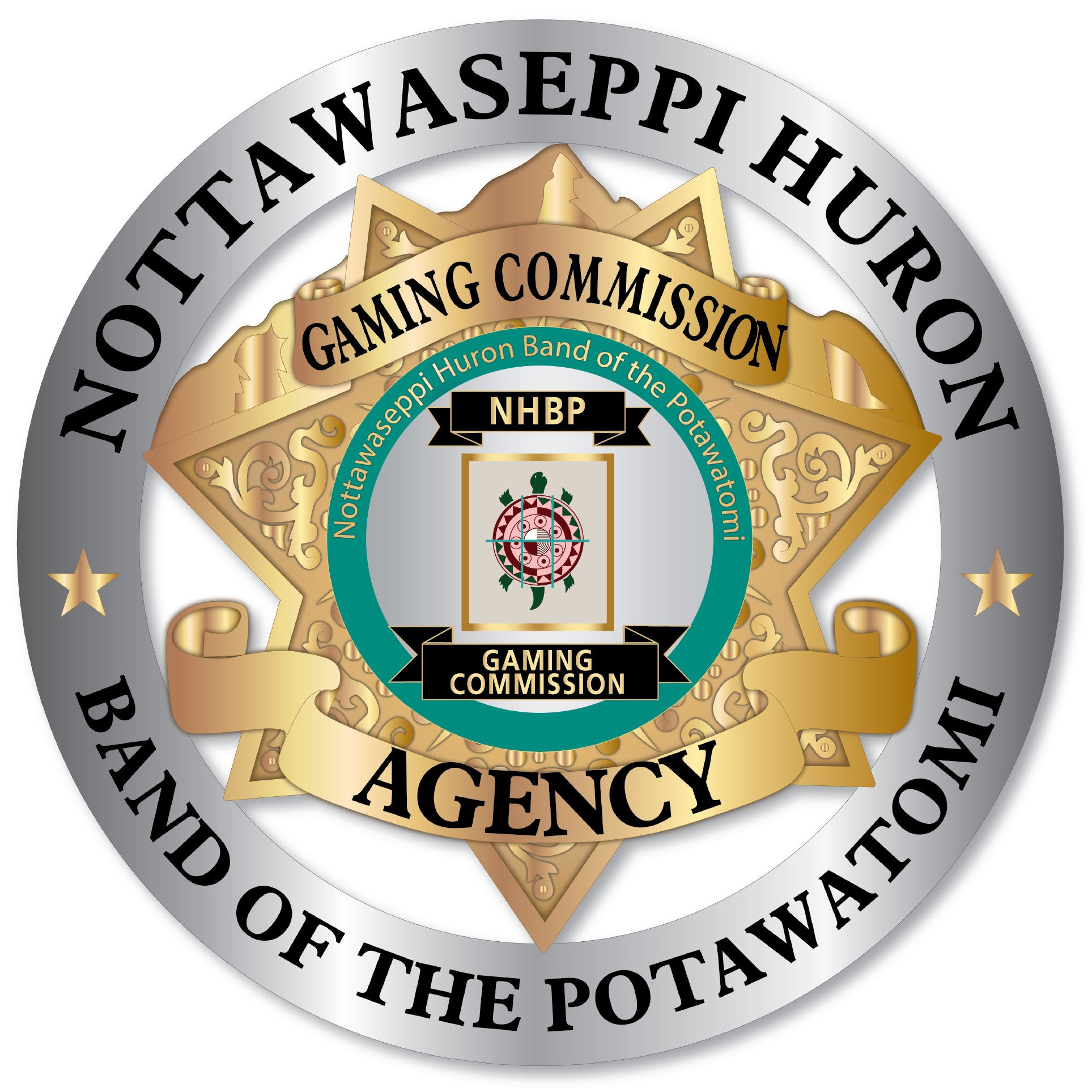 The Gaming Commission, consistent with the Tribe’s traditions and customs, shall protect the assets of the Nottawaseppi Huron Band of the Potawatomi;
By effectively, efficiently, and fairly performing the functions, tasks, and responsibilities delegated to the Commission by and through the Gaming Regulatory Act of 2010, its regulations, policies, and the people who serve the Gaming Commission in its purpose under the law. In carrying out the powers delegated, in a manner that promotes and preserves our Bode’wadmi values and traditions, the Commission strives to be guided by the Seven Grandfather Teachings.

Purpose of the Gaming Commission

The Gaming Commission’s role is defined by the Nottawaseppi Huron Band of the Potawatomi’s Gaming Regulatory Act of 2010 which made gaming lawful within the Tribe’s jurisdiction and delegated the primary regulatory role to the Commission.

The Commission ensures that all gaming within the Tribe’s jurisdiction is conducted in compliance with Tribal and Federal law and the agreement between the Tribe and the State of Michigan. In exercising its regulatory authority the Commission does not interfere with the managerial discretion of gaming operations.

Regulatory Framework
The U.S. Supreme Court ruled in 1987 that states had no authority to prosecute gaming conducted on Indian land (California v. Cabazon). State governments reacted with alarm and Congress began consideration of the Indian Gaming Regulatory Act (IGRA). In 1988, IGRA became law after Tribes and states reached a compromise which gave states unprecedented regulatory participation through the negotiation of Tribal-state gaming compacts.

IGRA recognizes the right of Tribes to conduct gaming on Tribal land in states where similar gaming is permitted outside the Reservation for other purposes. IGRA also emphasizes the dire economic need of Tribes, citing gaming as one of the few revenue-producing opportunities that has generated adequate revenues to sustain Tribal governments.

Class III All forms of gaming that are not Class I or Class II, including slot machines and house-banked table games, such as blackjack, roulette and dice games. (Only Class III games require Tribal-state compacts.)

Tribal Government gaming on the Potawatomi Reservation is governed in accordance with federal laws. In 2000, the band adopted, by resolution, the Tribal Gaming Ordinance and Tribal Gaming Regulations. These are comprehensive controls similar to those enforced in Nevada, which govern the Class II and Class III gaming operations of FireKeepers Casino and Hotel. The mission of the NHBP Gaming Ordinance, Gaming Regulations and Gaming Commission staff is to ensure full compliance with all applicable Tribal, federal and state statutes, as well as the Tribal-state gaming compacts and to protect the integrity of the games for the patrons and the tribe.

The National Indian Gaming Commission (NIGC) is a federal watchdog with extensive regulatory authority over Tribal gaming operations. The NIGC must give final approval to all Tribal gaming ordinances, management contracts and has the power to conduct background investigations and object to any person hired and licensed by a tribal government to work in a casino.

The Administration office is the office of the Commissioners and Executive Director. The office maintains the Gaming Commission staff and records, facilitates and coordinates all administrative functions from the Commission to other regulatory agencies, law enforcement and intelligence agencies while maintaining strong communications with FireKeepers Casino and Hotel operation.

Responsible for accurately and thoroughly managing the Auditing Department and Compliance functions through Tribal, Federal and State regulations the Gaming Commission is required to conduct audits within the casino. This includes all gaming and non-gaming auditing functions. Auditing is responsible for making the determination of the accuracy of all financial documentation generated by casino departments. Maintain statistical information on financial casino reporting. Ensures the casino is in compliance with policies, procedures, internal controls, regulations and applicable laws.

The Regulatory Compliance Department is responsible for completing elements of Daily Title 31 audits. All functions will be performed within the guidelines of the FireKeepers Casino and Hotel policies and procedures as well as Internal Control Standards and objectives.

Responsible for the successful overall development, installation, operation, and maintenance of all network management information systems for the Gaming Commission; including computers, software, audio and visual equipment. Also, manages the day to day operation of all commission computer & network systems. Plans, implements, and directs all departmental procedures for the Gaming Commission, for the accomplishment of business objectives in regards to Information Technology.

The Licensing Department conducts background investigations on all casino employees, gaming vendors, non-gaming vendors, and facilities licensing. Each casino employee must successfully pass a comprehensive background investigation. All Licensing staff perform work of considerable difficulty in analyzing, conducting investigation, inquiries, research, and documentation of detailed and specific information. The Licensing Department’s mission is to adhere to regulations while protecting the interest of the Tribe, casino and the reputation of the gaming commission.

Use this confidential submission system to report potential crimes, potential fraudulent and/or suspicious activities, or to notify the Commission of possible unethical conduct.

If you have a gambling problem, you can request the NHBP Gaming Commission to permanently exclude or ban you from the FireKeepers Casino and Hotel. To better assist you with self-excluding, the Commission has provided several options:

1. You may come into the Firekeepers Casino and Hotel, request to meet with a Gaming Commission Investigator who will explain the self-exclusion process and prepare your self-exclusion application.

2. You may obtain a self-exclusion application from the FireKeepers Security podium and follow the steps on page #2 of the application.

The purpose of the NTGC/R is to:

Promote cooperative relationships among the commissioners/regulators of Tribal gaming enterprises and other organizations; Promote exchange of thoughts, information and ideas which foster regulatory standards and enforcement that lead to consistent regulatory practices and methods of operations among the NTGC/R members; Promote educational seminars, which include commission/regulatory training, and other related activities; and The NTGC/R may act as a gaming regulatory advisory group to Tribal gaming organizations and others.

FireKeepers Casino and Hotel is owned and operated by the Nottawaseppi Huron Band of the Potawatomi Indians.

Why does the Gaming License application require so much information?

The Federal Government includes Indian gaming operations, conducted under or pursuant to the Indian Gaming Regulatory Act (IGRA), in the definition of a financial institution i.e.: banks, credit unions, etc. Financial institutions must conduct thorough background checks for all applicants desiring to work for them; therefore, the NHBP Gaming Commission also must be thorough in determining suitability for licensing someone who wants to work for FireKeepers Casino and Hotel. The information within the application is used in collaboration with the background investigation to make a suitability determination. The following is reviewed and considered, but is not limited to:
a. Civil
b. Criminal
c. Credit
d. All information within application

What is NHBPGC going to do with this information?

The NHBP Gaming Commission analyzes and verifies all the information provided to make an objective determination on the applicant suitability for a Gaming License.

How is my information protected?

In compliance with the Privacy Act of 1974, the following information is provided: solicitation of the information on this form is authorized by 25 U.S.C. 2701 et seq. The information will be used by the Tribal Gaming Regulatory authorities and by the National Indian Gaming Commission members and staff who have need for the information in the performance of their official duties. The information may be disclosed to appropriate federal, tribal, state, local, or foreign law enforcement and regulatory agencies when relevant to civil, criminal or regulatory investigations, prosecutions, or when pursuant to a requirement by a tribe or the National Indian Gaming Commission in issuance, denial, or revocation of a gaming license, or investigations of activities while associated with a tribe or a gaming operation.

Why does NHBPGC need financial information?

The Federal Government includes Indian gaming operations conducted under or pursuant to the Indian Gaming Regulatory Act (IGRA), in the definition of a financial institution i.e.: banks, credit unions, etc. Financial institutions must conduct thorough background checks for all applicants desiring to work with them; therefore, the NHBP Gaming Commission also must be thorough in determining suitability for licensure of someone who wants to work at FireKeepers Casino and Hotel. See question # 1

I have a bad credit score; does that mean I will not be able to work at the FireKeepers Casino & Hotel?

No, the report will not provide a credit score. However, if it is determined that an applicant is under an extreme amount of financial pressure, the NHBP Gaming Commission may request that the applicant present additional supporting information to make a determination for suitability. All licensing decisions are determined on a case-by-case basis. The determination may include position restriction up to denials of license; this is necessary to protect NHBP assets, patrons and other employees as well as the integrity of the gaming facility.

Why does it matter who lives in my household?

Evaluation of close relationships and associations, especially within an applicant’s household, is necessary to determine any potential risks that may include, but are not limited to:
• Conflicts of interest
• Collusion
• Scams
• Kickbacks
• Other types of illegal and/or fraudulent activity

What if I refuse to provide the information requested?

I have been convicted of a felony; can I still receive a Gaming License?

I have been convicted of a felony; can I still receive a Gaming License?

I have been convicted of a felony and it has been expunged or reduced to a misdemeanor; can I still get a Gaming License?

These kind of issues will be handled on a case-by-case basis. Additional supporting court documentation may be required.

I have been convicted of a misdemeanor; can I still get a Gaming License?

These kind of issues will be handled on a case-by-case basis. Additional supporting court documentation may be requested.

If I have been denied a gaming license by the NHBP Gaming Commission in the past, can I reapply at a later date?

In most instances, applicants may reapply one year from the date of denial.

If my gaming license has been denied by another gaming regulatory agency or Tribe, can I still be licensed by the NHBP Gaming Commission?

In most instances, applicants may apply for a Gaming License; the determination will be made on a case-by-case basis.

Can I concurrently hold a valid gaming license with another gaming regulatory agency or Tribe?

No. You can only hold one Gaming License at a time. Any Gaming License held with another regulatory body will have to be relinquished prior to being licensed through the NHBP Gaming Commission.

Can I be licensed by NHBP Gaming Commission if I have a relative or household member who is also licensed by the NHBPGC?

Yes, the licenses are granted on an individual basis.

Does the employee license cost me anything?

Yes, however that is determined by FireKeepers Casino & Hotel and the payment is made through casino payroll deduction.

What happens if my license is denied, suspended, or revoked?

You will not be allowed to work in any NHBP gaming facility or gaming-related enterprise until licensed or the license is reinstated. Anyone who has been suspended, denied or revoked may request a hearing with the NHBP Gaming Commission. If the license is granted or reinstated, the licensee may be subject to additional conditions prior to and/or after licensure.

If I am licensed by NHBPGC and my employment is terminated either voluntarily or involuntarily and I am rehired, do I have to go through the entire process again?

Yes, we may be able to use some of your past information for the relicensing process.